Weathernews Inc.（HQ：Tokyo, Japan; Chihito Kusabiraki, CEO) announces the opening of a new sales office (Weathernews Scandinavia Filial Af/Weathernews Inc., Japan) in Copenhagen, Denmark from November 1st.
By opening this new sales branch, the company hopes to accelerate the development of its OSR (Optimum Ship Routeing) service for new and existing Scandinavian customers in the shipping industry. By tailoring it to the needs of this growing market, the service will further optimize commercial shipping operations in Europe. In addition, the upcoming launch of an independently designed satellite, WNISAT-1, will facilitate the realization of a Polar Routeing support service for companies operating voyages through the Northern Sea Route.

OSR service supports the diverse needs of shipping companies from safety and punctuality to economy and ecology. Weathernews began offering OSR service as a next-generation alternative to its traditional "oceanrouteing" service from 2009. The company's primary customer base in Japan and Asia has already been enjoying the benefits of OSR, and now through the company's new branch in Copenhagen, Weathernews plans to stimulate the evolution of OSR service for Scandinavian companies currently leading the shipping industry.

Also, because of the geographical location, shipping companies based in Denmark are ideally located for voyages through the Northern Sea Route. The use of this route as an alternative to longer and more costly traditional routes via the Suez Canal and the Cape of Good Hope is expected to become more common in coming years. To support safe voyages and efficient voyage planning for progressive companies making use of this pioneering trade route, Weathernews has begun developing a dedicated Polar Routeing from last year.

Prior to the opening of the new office, the company hosted its TFMS (Total Fleet Management Service) Forum entitled, "Close to You & Innovation WITH you!" A total of 80 representatives of 33 shipping companies based in 13 different countries gathered at the Copenhagen Opera House on October, 24th. Weathernews staff gave presentations on about grand concepts like optimized shipping reflected in the recent tramper market, and the current state of the Northern Sea Route which then led to discussions where participants shared their valuable experiences in the shipping industry. In the future, with the launch* of the independent ultra-compact satellite, WNISAT-1, Weathernews plans to create new and improved value creating services together with the Scandinavian shipping industry.
*Due to issues with the launch facility, the schedule for WNSAT-1 launch is currently pending. 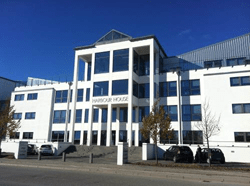