Comprehensive Weather Website:“Weathernews”Simultaneous Startup of Service in the U.K., Korea, and Australia

Starting January 1, 2007, Weathernews, Inc. (based in Tokyo, Japan), the world’s largest publicity-traded weather information provider with business bases in 16 countries, has begun offering the services of its comprehensive weather website, “Weathernews” to the U.K., Korea, and Australia.With Japan, which has already enjoyed access to a website, the number of countries for which Weathernews is providing such on-line service is now up to four.There are plans to steadily expand service to other countries throughout the world.The site is free to access and use.

Weathernews currently provides services targeted for use within 30 different industries representing clients in 40 locations across 16 countries.A segment of these services targets corporate businesses, and a significant segment targets also private individuals, such as services broadcast via mobile phones.Now, as part of its services aimed at individuals, an on-line service has been launched in the U.K., Korea, and Australia, with plans for steady expansion to other countries.This “Weathernews” service initially contains three basic products:a 7-day weather forecast, cloud imagery, and radar imagery. With time, the content will be expanded to include a variety of information as might be useful for the daily lives of users in each country. 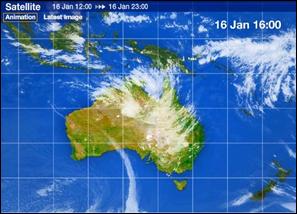 A major feature of the website design includes the use of Flash technology, which allows for a layout that enhances the ability of a user to browse, and an interface that heightens operability.This advanced design sets the Weathernews website apart from other weather websites.In particular, using Flash allows for the highly advanced rendering of satellite and radar images.Traditional weather sites are limited to describing cloud formations with still satellite pictures and text.However, the Weathernews site uses animations to show the steady movement of clouds and can even depict the changes in cloud thickness that occur over time.

Weather Forecasts that are Generated by Weather Professionals

A total of 40 meteorologists at the GlobalCenter in Weathernews headquarters in Japan will generate the forecasts that are provided by the Weathernews website. These meteorologists not only provide pinpoint forecasts for each city within the country, they also forecast regional weather trends and provide advice on how to deal with those expected trends.